It’s kind of funny that I’m today’s entry is about the flowers I planted earlier this week, because it might be going down to 30 degrees tonight and I have to bring the plants in. *sigh* Oh, North Country. This is also why I do container gardens. 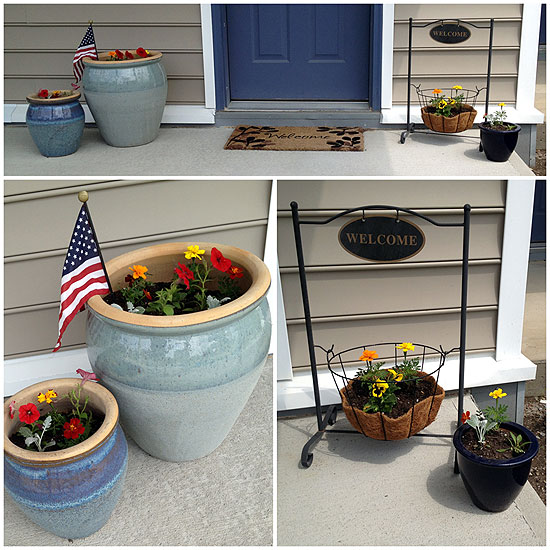 I decided to go with a red-orange-yellow color scheme this year. Usually, I go with pink-purple-blue, but I went something more gender neutral since John is home, haha. I bought them from Walmart on Monday and planted them while The Munchkin was in hourly care. It was such a gorgeous day, and it was awesome to be outside doing something besides going to the playground. I’ve been wanting to plant flowers for a while now, but didn’t feel confident that the cold would stay away until earlier this week. Irony! 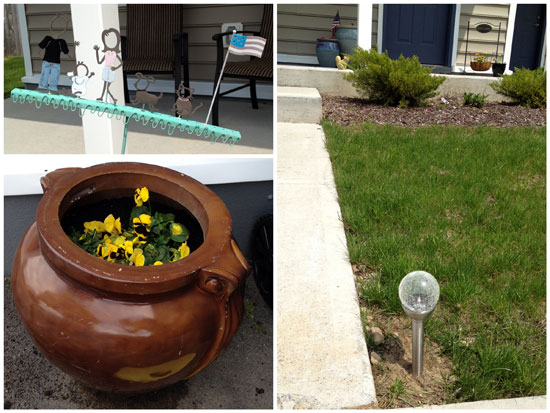 For my birthday after The Munchkin was born, John got me this yard sign with our little family on it. I need to get another little boy now, but I don’t know who makes it. 🙁 The company name isn’t on it anymore. Does anyone recognize it? Please let me know if you know where I can get more people for it. Thanks!

I had some extra flowers left over, so I planted them in the pot out in the back by the garbage cans. This pot originally came to live there because it doesn’t match the blue pots on the front porch and looked silly all alone in the back yard. So I stuck it in the back of the house because it had also filled with mud and kind of smelled. Well, I dug out all of that stinky mud and planted the flowers. Much improved! Pansies for the Panzers. I still have some left over, actually, but I’m out of pots…maybe I’ll just plant them in the ground out front?.

Speaking of out front, I also put a couple of little solar powered globes at the end of the walkway. I haven’t actually checked them out at night to see if they work though, haha. Peeking out the window right now, they don’t appear to…but it could be that the BRIGHT FREAKING STREET LIGHT right outside of out house is making them think that it’s still day time. Seriously, those lights are horribly bright.

Most of the flowers don’t quite stick out of the pots…I guess I didn’t add enough dirt, but didn’t notice until I had finished planting them all and ran out of dirt. Hopefully they’ll keep growing taller and look pretty from the street? Right now you can only see them if you’re at the door, heh. Is there a color thumb that’s in between a green one and a black one? That’s the color I have.