I only have one more Halloween post after this one. Sorry! Hurricane Sandy delayed our festivities a couple of days so we had to smush everything and do it all at once! A bunch of smaller post is better than one super long Halloween post, right?

On the 30th, there was supposed to be a “Trunk or Treat” event at the USO, but it was cancelled because hurricane Sandy was supposed to be bad here. Luckily, the superstorm didn’t affect our area, and the USO put on a Halloween party that night instead. It started at 5:00, but The Munchkin usually naps until 5:30, so we didn’t get there until after 6, and I had to wake The Munchkin up to even get us there at that time. He was not a happy camper as I pulled his costume on and dragged him to the car, but he cheered and clapped as we pulled into the USO’s parking lot, so it was all good. I don’t know if he saw the other kids in costume, or what, but I breathed a sigh of relief. 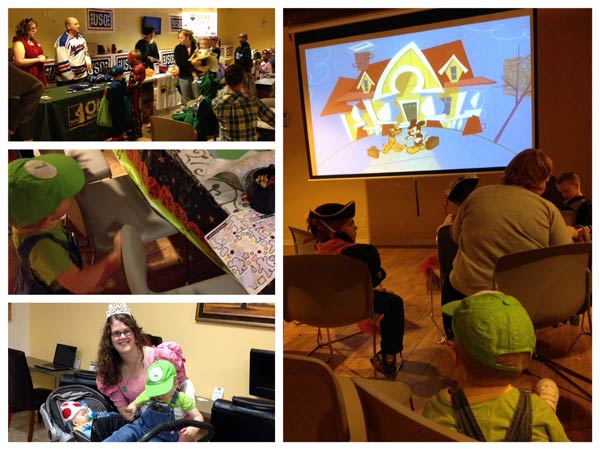 The party was being held in their ballroom, and the place was pretty crowded. I brought the stroller, which is unusual for me to do in crowds, but it ended up being a smart idea, because it would have been sooo hard to corral The Munchkin in that crowd while wearing The Bean. I pushed them from table to table, and practiced “Trick or Treat” with The Munchkin, but he didn’t say it himself. He did hold out his panda backpack to a couple of tables though, so I could tell the concept was sinking in.