Last Halloween post, I promise, ok? I can’t help it, it’s one of my favorite holidays! 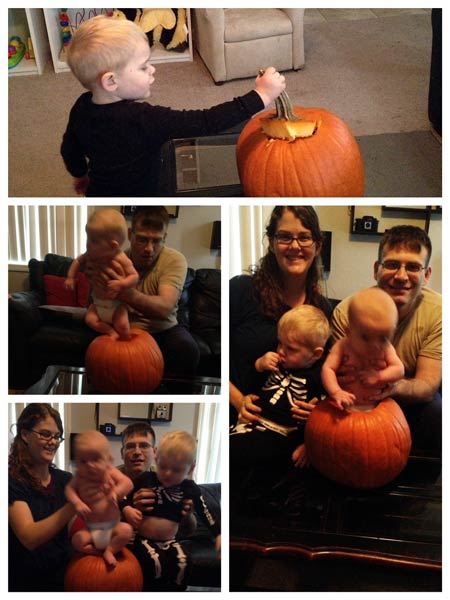 I don’t know how Halloween snuck up on us, but it came and our pumpkin still wasn’t carved! I couldn’t have trick or treaters come without a jack-o-lantern on our front porch, so I set out to carve it after breakfast that morning. I put our “Hocus Pocus” DVD in and John cut out the hole in the top. Once I had the insides scooped out, I set up the tripod so that we could take a family picture with The Bean inside the pumpkin. We did this for The Munchkin’s first pumpkin too, but my mom was there to take the pic. Once again, I found that family photos are hard. I hope Santa brings me a real camera this year so that I have more than my iphone to use to document my life…

Anyway, we quickly realized that John cut the top hole waaaaay too small for The Bean to fit into, so he had to cut more out so we could stuff the little guy in there. This posed a problem for putting the stem, back onto the pumpkin, but it’s ok – I found a solution: 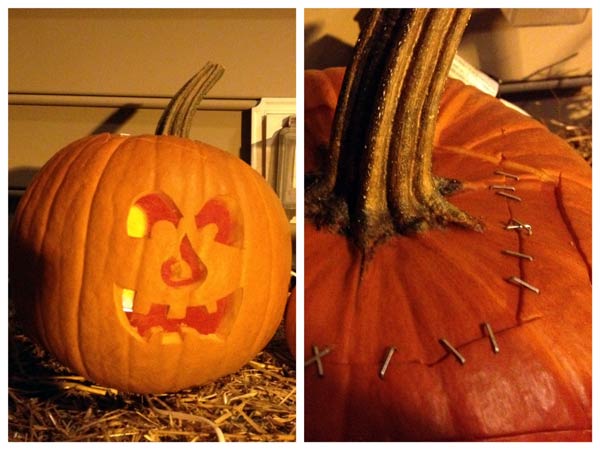 STAPLES! Yup, I stapled the pumpkin pieces together so that I could put the top back onto the pumpkin. I didn’t use the staple gun though. The pumpkin was soft enough that I could just press them in place. Somehow, between nursings, and lunch, and naps, and whatever else, I found myself carving out the face on the pumpkin when the first few trick or treaters arrived! I was originally going to try and make a Frankenstein-type face, to go with the lid staples, but I ended up just freehanding a face and sticking it outside to get it done with. Still looked cute though!

PROTIP: Tea-light candles inside an old babyfood jar don’t get blown out by post-Sandy winds.