Geez I’m still not getting the hang of doing these on time. Oh well… at least I’m doing them! The Bean turned three months old on the 20th of last month. I thought he had a doctor’s appointment last week, so I was waiting until after that so that I could do this post with some stats, but the appointment ended up being for The Munchkin instead. Whoops! So, observational post this time. 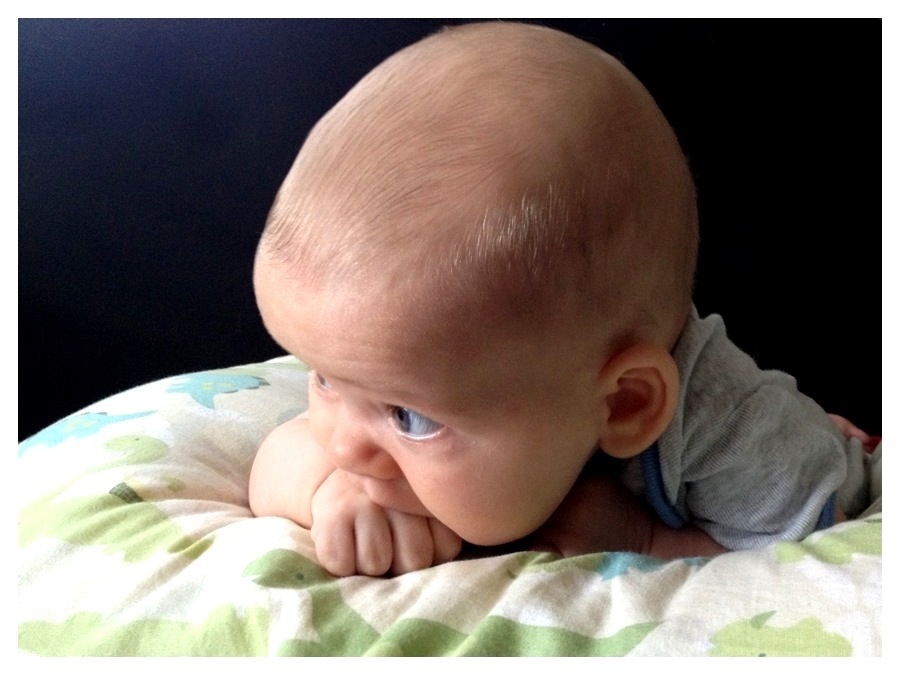 I can’t believe how big The Bean has grown over the month. I don’t know if it’s because I’m still nursing (I’m still nursing BTW, yayayayayayay!) or if my memory just doesn’t remember The Munchkin well, or what, but The Bean seems like a little chunker! The above picture doesn’t show it well. Really, it’s just his legs that seem chunky to me. So cute.

He is still not a fan of tummy time, but he is getting better at it. If I put him on the boppy, on the couch, and then sit on the ground in front of him, he is able to do it for about five minutes without giving up on life. He also has been showing interest in the toys that dangle above him on his play mat, but only if the music is playing. I’m not sure why, but he gets fussy if he’s on the mat and “Old McDonald” isn’t playing. He seems to be batting at the toys with his hands more than he did last month, and has figured out how to raise his feet up so they smack the toys too. Using his feet to hit the toys seems to be preferable to using his hands, haha.

Speaking of hands, they are his new favorite non-food-related thing to suck on. He will even spit out his pacifier sometimes in favor of eating his hands, ha. I hope this doesn’t mean he’s getting close to teething. I’m not ready for that, mentally. I was gifted an amber necklace by my neighbor though. Do any of you use one? Or have you used one in the past? When should I put it on him? Should I wait until I see teething symptoms?

He is sleeping really well. He takes lots of naps, but sleeps quite a bit at night too. Sometimes he naps in his crib during the day, and sometimes he naps in his bouncy chair. He is mostly sleeping in his crib at night, but depending on how many times he wakes up, he sometimes ends up in our bed too. Actually, some nights (a lot of nights?) I nurse him laying down, fall asleep, wake up once he’s asleep, and transfer him back into his crib until the next round.

Let’s see what babycenter.com says he should be able to do…